A Flip is an acrobatic maneuver in which the practitioner preforms one or more rotations while airborne. They are rarely used in Parkour, as they rarely aid in efficient movement; however, they are very often performed in freerunning and tricking as they are often quite visually impressive.

Although flips have limited usefulness in Parkour, they can occasionally aid in efficient motion. Sideflips can be used to quickly get over a low obstacle (especially when ordinary vaults cannot be used, such as over barbed wire or bushes). A wallflip with a 180 degree twist can be used to quickly reverse one's momentum. Back, front, and side tucks can be useful when accidentally falling (in order to land feet first). They also teach the practitioner to be aware of their body and its relation to surroundings.

Frontflip followed by a roll 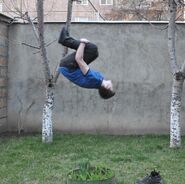 A wall flip
Community content is available under CC-BY-SA unless otherwise noted.
Advertisement