The Méthode Naturelle (natural method) is a system of movement pioneered by Georges Hébert (27 April 1875 – 2 August 1957). It is often considered the predecessor of Lé Parkour.

Georges Hébert (27 April 1875 – 2 August 1957) was an officer in the French navy during the First World War. He happened to be stationed near St. Pierre, Martinique in 1902 at the time of a catastrophic volcanic eruption. Hébert aided in rescuing the wounded and trapped. His experiences led him to believe that athletic skill is needed in order to more effectively help others, as reflected in his motto - "Être fort pour être utile" ("Being strong to be useful").

Hébert traveled around the world and was impressed by the physical accomplishments of indigenous people of such places as Africa, noting that even though they had no formal training, they were strong, flexible and nimble. When he returned to France, he began developing the méthode naturelle, or "natural method". The méthode naturelle was based on a number of influences, including the indigenous people he observed, classical Greek gymnastics, and acrobats, gymnasts, and naturists of the time such as Francisco Amorós, Friedrich Ludwig Jahn, Paul Carton, and Georges Demenÿ.

He began teaching this method to the French marines in the French seaport of Lorient, and by the Second World War the French military had adopted his training methods as the standard for system for physical education. He also criticized the physical inactivity social norms imposed on women of the time, and believed they should strengthen themselves physically. He died in 1957, but his method continues to be taught. His work also influenced Raymond Belle (and in turn David Belle), thus becoming one of the major influences on Lé Parkour.

The Méthode Naturelle aims for movement as natural as possible, both in natural and urban environments. It comprises methods of locomotion, such as walking, running, jumping, balancing, crawling, climbing, and swimming, as well as manipulative motion such as lifting, carrying, throwing and catching. 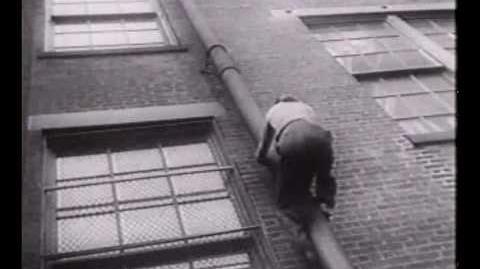 Methode Naturelle 1930s
An example of the Méthode Naturelle from the 1930's, by John Ciampa and Georges Herbert.
Community content is available under CC-BY-SA unless otherwise noted.
Advertisement